“In the period between about 1935 and 1980, America became steadily more equal. This just happened to be the period of our most sustained economic growth. In that era, more than two-thirds of all the income gains were captured by the bottom 90 percent, and the bottom half actually gained income at a slightly higher rate than the top half. By contrast, in the period between 1997 and 2012, the top 10 percent captured more than 100 percent of all the income gains. The bottom 90 percent lost an average of nearly $3,000 per household.”

When public policy favors the lower and middle classes, genuine economic growth occurs that benefits both the rich and the poor. Demand drives and economy, and when policy shifted to the supply-side during the Reagan administration, suddenly all of the income gains happened at the top, and continue to do so! 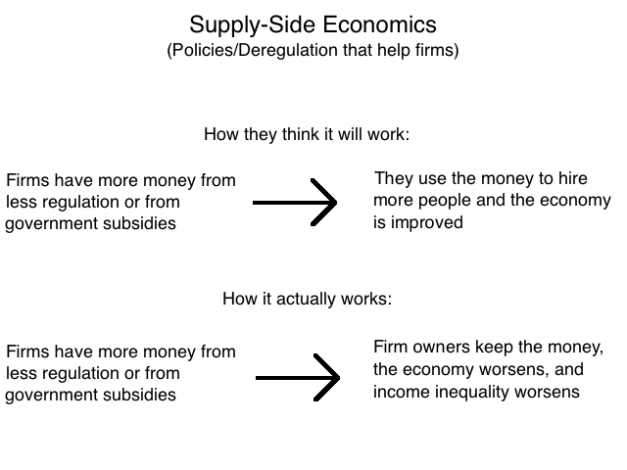 People remain fearful of a regulated free-market because they view it as an infringement on liberty, but they ignore the times when free markets or deregulation produced a market failure or severe consequences for a majority of America. Look to the financial crisis of 2008, the negative externality of global warming, or income inequality for your evidence.

The point I’m getting at is that some regulation can be a good thing. The right policies can leave everyone better off, and that’s usually achieved by enacting policy that favors the majority of America and not just those at the top.

3 thoughts on “THE SHORTFALLS OF LIBERTARIAN FREE MARKET IDEOLOGY”