If you don’t typically read my entire analysis, this is the time to read it all. There are many caveats to the below numbers.

Tuesday is effectively the last of the Democratic primaries for 2016 (with the exception of D.C.), and is indeed the last opportunity for the Sanders campaign to close the pledged delegate gap. As we all know, all eyes are on the state of California, which is set to allocate 475 delegates between the two candidates. Bernie Sanders will need a massive majority of these 475 delegates (and, realistically, several large wins elsewhere too) to take the lead before the Democratic convention. Unfortunately for Bernie, my models are not suggesting that a pledged delegate lead is currently possible, despite four projected wins on Tuesday. However, it does look like California will be a very close race, and there is a very real possibility that Sanders could win there after all. Here are my projections: 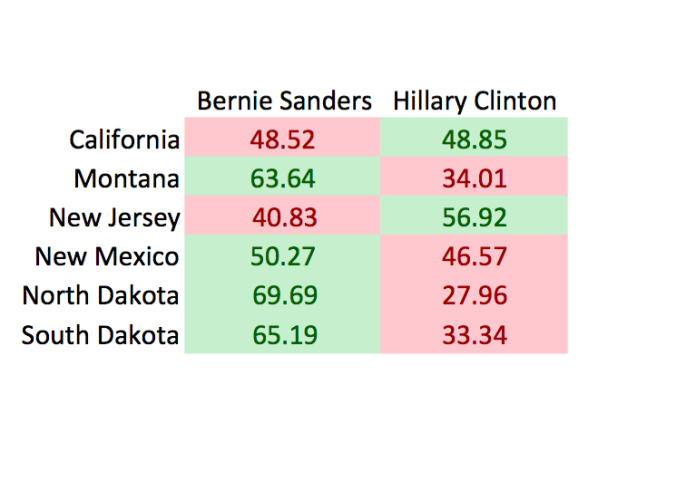 If you would like to support my work and want me to be able to afford Top Ramen (or maybe even Mellow Mushroom pizza if you all are extraordinarily generous) while I’m working on these statistics, please click this link to donate to Tyler’s Food & Rent Fund!

Bernie Sanders should do better in California than is currently expected. Though I do believe that the state is leaning towards a Hillary win, there are several reasons why it should be a close race:

However, California typically has a large amount of early voting, which has historically been very beneficial to Hillary Clinton. I am admittedly unsure of the exact percentage of Californian likely voters that have chosen to already vote by mail, but it is my personal belief that this number will be around 40-45% after all of the vote comes in. I expect Bernie to capture only about 40% the early vote while Hillary secures 60%, but at the same time I am expecting Bernie to win about 57% of the day-of vote while Hillary trails with about 43% on Tuesday.

With all of that being said, I am very uncertain of what will happen in California. My personal feeling is that Bernie Sanders has a decent chance of winning, but gut feelings aren’t typically based on numbers, so take that with a grain of salt.

Bernie Sanders should clean house in Montana. This is for the following reasons:

We should see a blow out in Montana. Clinton has surprised us all before (Wyoming…), but I would be exceptionally surprised to see a margin of victory of less than 15% here.

Hillary Clinton should win New Jersey with ease due to the following reasons:

I believe that the margin of victory in New Jersey will be anywhere from 5-20%.

New Mexico stands to be one of the most interesting elections on Tuesday. Other outlets are projecting a Hillary blow out here (and I’m not so sure about my projection that I would say that they are definitely wrong), but I am projecting a Sanders win for the following reasons:

These are the two primary drivers of my New Mexico Sanders win, but there are two major factors that may produce the alternative outcome.

If Hillary does win New Mexico, a very real possibility, I believe that it will be because of the closed primary format, and not the effect Hispanics have. Hispanics do not seem to vote as “monolithically” as African Americans do according to all of my county level analysis (an analysis performed almost entirely to answer the New Mexico Hispanic question). Perhaps I am totally in left field predicting a Sanders win here, but all of the indicators that I rely on are pointing solidly in that direction.

In case anyone wasn’t able to already predict that Sanders would win North Dakota, I’ll make the case.

South Dakota is highly similar to North Dakota, and for that reason Sanders should probably win by around the same amount.

In conclusion, major kudos to both candidates for such a hard fought race. As you all probably could’ve guessed, I am a Bernie supporter, but despite my perceived shortcomings of Hillary, I do believe that she would make a good president. Obviously I would prefer that Bernie win, but with the system we have now (super-delegates), Bernie probably came as close as any seemingly unknown outsider ever could.

Lastly, I want to say THANK YOU to all of you that have consistently tuned in and listened to what I have had to say over this election season. It really means the world to me that hundreds of thousands of people care about and appreciate my work. Also, a special thanks to all of you who have donated to help fund the work that I do here, and have ensured that I have a roof over my head! I am truly blown away at the support I have received, and I’m very excited for all of the upcoming elections later this year. What started as just an experiment to see if Facebook and Google data were useful in predicting elections has blossomed into something much bigger, and, in my opinion, we are witnessing the birth of an entirely new methodology of predicting elections; one that will be more powerful in the future than we could have ever imagined.