As you all know, I’m just a graduate student with no income. If you would like to support my work and want me to be able to afford Top Ramen (or maybe even Mellow Mushroom pizza if you all are extraordinarily generous) while I’m working on these statistics, please click this link to donate to Tyler’s Food & Rent Fund!

Also, if you are an employer and have an open position, ideally in the D.C. area, I need a summer job! Please contact me if you think I would be a good fit for your organization. Paid positions only, please.

I am estimating that Bernie Sanders will win both primaries tomorrow, in Kentucky and Oregon. Using my metrics, Oregon seems poised to be a blowout Sanders victory, while Kentucky stands to be a hard-fought battle between both candidates for a win. I have put together an entirely new framework over the past week to account for votes going to other candidates, which is where my West Virginia projection fell most short. It is a more comprehensive model, and should be more accurate. For anyone concerned, my old model is generating very similar estimates for tomorrow. Here they are: 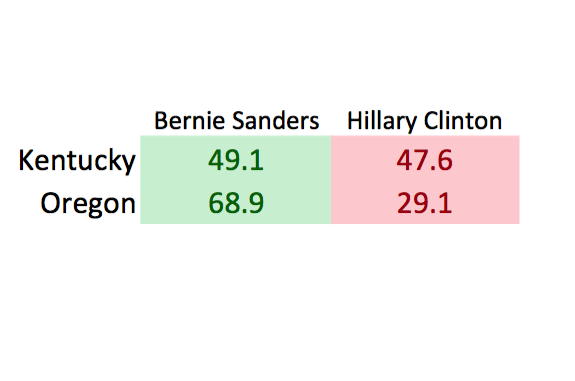 The demographics of Kentucky favor Bernie Sanders. It is a white state with only a 7.8% African American population, similar to that of Kansas (5.9%), Wisconsin (6.3%), and Indiana (9.4%), all states that he has previously won. 7.8% is approximately at one standard deviation from the mean Black population percentage (4.2%) of the states that Bernie has won, meaning that it is not too far out of the ballpark for a Sanders victory. Bernie has also done quite well with campaign contributions in Kentucky, with the logged value of the relative number of <$200 contributions being 0.337. This is slightly under the average of states that he has won, 0.366, but far higher than the average of the states that he has lost, -0.07. These reasons are the primary drivers of my estimated Sanders victory.

Bernie’s Facebook presence in the state is poor, 73.91%, which is lower than any state he has won at this point. Bernie’s relative search interest in Kentucky is poor as well, with the three-day average currently at 0.927. The mean three-day average for all the states that he has won is 2.167, though just last week he won West Virginia at a relative search interest value of 0.94.

Lastly, Kentucky has a closed primary electoral format, which Bernie has never won before. Regardless of who actually wins the Kentucky primary tomorrow, I believe it will be a very close race.

Oregon is Bernie’s best state with the exception of Vermont when it comes to Facebook data. He has 84.314% of Democrat Facebook Likes, similar to Idaho (84.0%), Maine (84.09%), and Alaska (83.87%) (Vermont was 95.00%). Demographically, Oregon is about as good as it gets for Bernie. The African American population is only 1.8%, similar to Hawaii (1.6%), Utah (1.1%), and Alaska (3.3%). Only in Vermont and Alaska did Bernie outpace Hillary to a greater extent than in Oregon in the relative number of <$200 campaign contributions. These are the primary drivers of the massive margin of victory that I am projecting. It is difficult to reconcile the one and only poll (that showed Hillary with a 15% lead… but also had 19% undecided… and was also conducted well after ballots had already been received and presumably had already been mailed off by many voters) conducted in Oregon with this projection, but I refuse to arbitrarily tack on extra points because I have a hunch about something.

Oregon is entirely vote by mail. Clinton has traditionally dominated early voting, but Oregon’s format is unique to all the states that have already voted, so it is difficult to predict how much of an effect this will have. Personally, I doubt it will be significant due to practically every metric being overwhelmingly in Bernie’s favor (imagine Vermont was only vote-by-mail, would that have really changed the result?). Also, the party registration deadline was recent, April 26th. Bernie’s current relative search interest is quite low, but Oregonians began receiving their ballots two-three weeks ago. If we go back in the Google Trends data to April 26th (around the day voters began receiving ballots), Bernie’s relative search interest for the next week and a half was around 1.45; not bad. The average for all the states he has won is 2.167, but the standard deviation is 0.61, so 1.45 is not indicative of anything particularly remarkable.

Lastly, Oregon is also a closed primary, which Bernie Sanders has never won before. 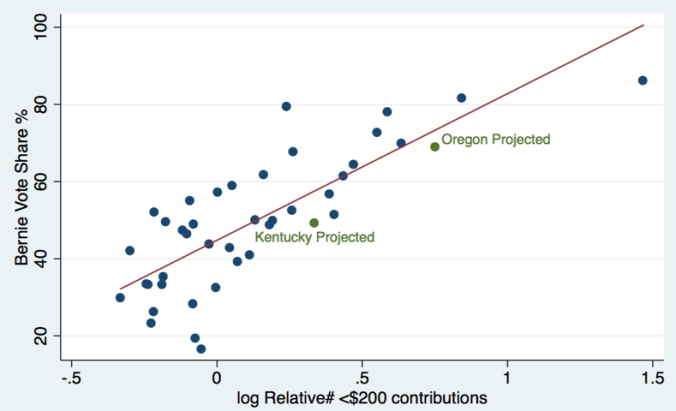 If the above estimates are correct, this should give Hillary Clinton a ~24 delegate deficit tomorrow. Good luck to both candidates, and happy voting to all you Oregonians and Kentuckians!