Sanders search interest has fallen dramatically in Arizona over the past two days, and it remains to be seen if this will have a significant impact on the results tonight, but this same rapid downward search trend happened in Minnesota and did not ultimately change anything. Meanwhile, search interest for Bernie in Idaho and Utah is through the roof. Here are my final estimates for tonight:

Hillary’s greatest advantage at this time is likely all of the early ballots that have been cast in Arizona. Other states have shown us that residents who are proactive enough to cast early ballots seem to vote disproportionately for Hillary Clinton (older people, of course). Who knows if this trend will hold true in Arizona, though I imagine it will.

Here are some charts to demonstrate a few relationships between variables.

In all charts, the Y-axis is the %Vote Share of Bernie Sanders. 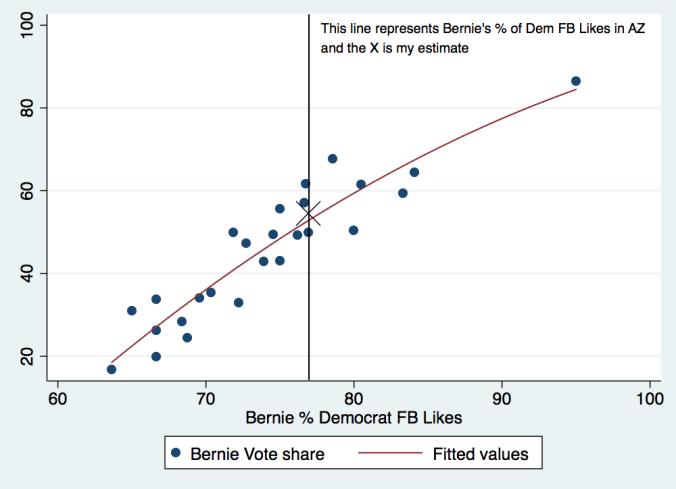 The chart looking at Facebook like proportions should demonstrate that Bernie’s current “polling average” of ~23% in Arizona is not reflective of reality. Bernie almost has to land somewhere between 45% and 63% because this is such a strongly correlated variable.

Hopefully this convinces at least a few people that what I am proposing with Arizona is not in any way a radical idea.  As you can infer from this chart, in general, Hispanics don’t tend to vote for Hillary or Bernie in America. There is actually almost perfectly no correlation. 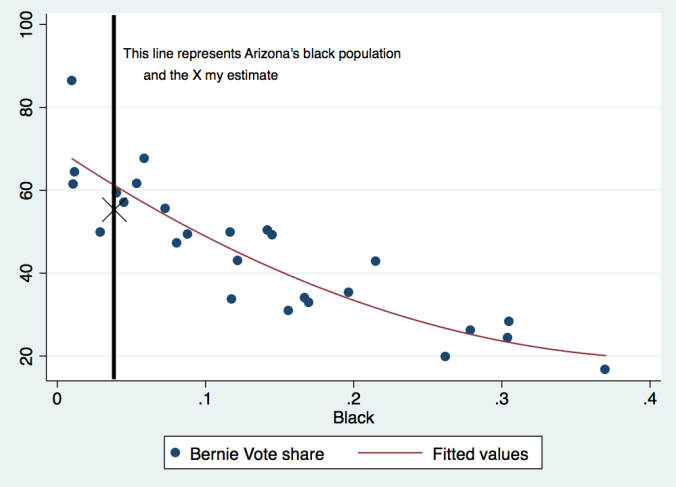 As for the %Black variable, and as you can see in that chart, I am actually estimating Bernie to under perform with regard to it. Bernie almost has to land somewhere between a 48% to 75% interval because this variable is also so strongly correlated with vote share.

Thanks for all of the interest,